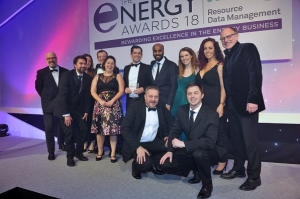 Having entered our household energy-saving programme with L&Q for the prestigeous Energy Awards, we were delighted to be told in September that we had been short-listed as a finalist. As such a table was booked for the biggest awards night in the industry and black ties were duly dusted off for 5th December.

Following an excellent dinner and wine to match, the awards were announced. We had entered for the category of Residential Energy Project of the Year, and were aware that the field was strong. Of the 6 finalists, many had big-name companies behind them (British Gas, Panasonic, SSE, etc). Indeed the judges described it as “a category full of good entries”.

Hence when it was announced that “the judges liked the marginal gains approach of technology, behaviour change and building fabric”, we started to get excited… and the rest is history.

“To have won Best Residential Energy Project of the Year means such a lot”, said Technical Director, Andrew Smith. “There has been such a lot of hard work involved by so many people and it is so nice to be officially recognised for this”.

He continued: “When we started ZapCarbon 10 years ago, we wanted to help people save energy. To now be nationally recognised for having helped tens of thousands of households is a truly a dream come true.”

….The celebration continued long into the night!

About the Author: Kerry Hume